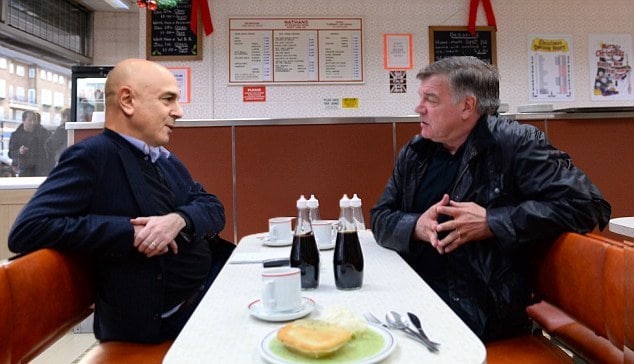 Daniel Levy has been photographed meeting with Sam Allardyce in the ‘Greasy Butty’ cafe outside Birmingham. The West Brom manager is believed to top Spurs’ shortlist to succeed José Mourinho.

“Sam has a contract with West Brom,” Levy told Soccer on Sunday. “But if he’s available, I know Spurs fans would want me to move heaven and earth to secure him. Not on a short-term contract — 6, 7 years minimum, with no escape clauses. It’s the least our wonderful fans deserve.”

“His philosophy is tailor-made for Spurs,” said the 59 year-old. “Sam calls it Hoofy-Takka, but I call it ‘Pukeball’. Other teams will hate playing us as much as our players hate being us. So it’s win-win.”

“Harry was beside himself when he heard Sam is interested,” added Levy. “He literally vomited with excitement.”