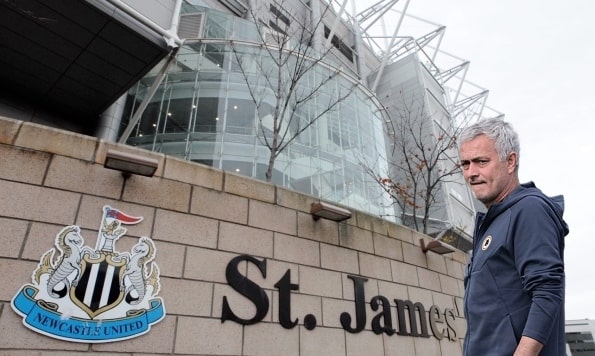 José Mourinho has been photographed loitering in and around the vicinity of St James’ Park. The Roma boss has repeatedly expressed an affinity for the club since rumours of a Saudi takeover first materialised.

“No reason,” he told Soccer on Sunday, when asked why he was outside the stadium. “I was in Newcastle to visit my dear aunt, Maria Santiago McTakeover, and took a stroll. This has nothing to do with Newcastle being bought by His Highness Mohammed bin Salman, who may I say is freakishly handsome and by all accounts has an enormous penis.”

“I am very happy at Roma,” said the 58 year-old. “But would I answer the phone if Newcastle called? Only out of respect for the memory of Sir Bobby, who was like a father to me, much as Alan Shearer is like a brother to me and Ant and Dec are like, I don’t know. Weird, freak sons?”

“Now if you’ll excuse me, I have a thirst on me for a Newcastle Brown Ale,” he added. “And a plate of that Panhaggerty shite, which doesn’t at all look like it’s been blown out onto the plate through the arse of a Geordie builder.”