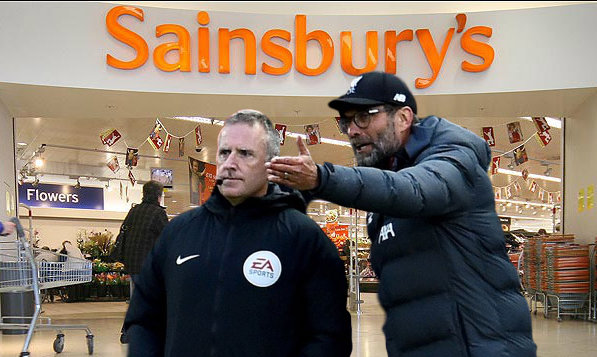 Jürgen Klopp has been spotted roaring at John Moss outside a local Sainsbury’s four days after the referee served as fourth official at Old Trafford. Klopp briefly allowed Moss to rest while he roared at a separate fourth official in Belgium, before resuming roaring at the 48 year-old this morning.

“Jürgen’s a passionate guy,” the Sunderland-born official told Soccer on Sunday. “Doctors said I might regain 20% of my hearing after Sunday, but then Klopp has climbed in through my bedroom window, pulled me out of bed by my ankles and roared away the last flaps of skin on my ear drums.”

“I never heard him coming, for obvious reasons,” added Moss. “Vera jumped on his back and tried to cover his mouth, but he’s gorilla-slammed her out the open window and onto the roof of the Range Rover down below in the driveway. The car alarm woke the whole neighbourhood, not that I could hear it. Chance would be a fine thing.”

“The roaring is a mixture of english and german,” said Moss. “At one point he either called me a ‘künt’, or a ‘cunt’. The german word means someone of great intelligence who misuses their gift. The english word? Well, politeness stops me from saying.”