Alan Hardy has apologised for posting a picture of his enormous penis on social media platform Twitter yesterday. The Notts County owner swiftly put the League Two club up for sale in the aftermath of what some in the press have dubbed ‘Schlong-gate’.

“I’m sorry if my enormous penis offended anybody 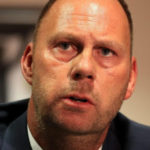 ,” Hardy told Soccer on Sunday. “It’s been a difficult season, and I thought seeing my ring-a-ding-dong might give everyone a lift. I realise now that the sheer girth of it frightened some people. Especially the very young and the very old.”

“I’m going to take a break from tweeting pictures of my penis,” said Hardy. “I’d be lying if I said twitter has seen the last of my schlong, but I’ll be keeping the zipper up for the time being.”

“The support I’ve received has been humbling,” he added. “To all the wellwishers who have sent me kind messages and requests for pictures of my massive hairy balls, from the bottom of my heart, thank you.”