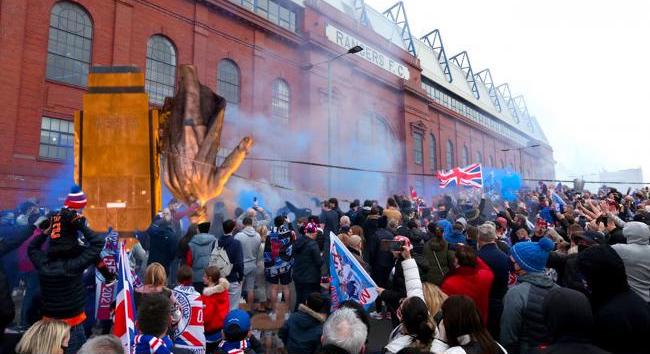 There were ugly scenes in Glasgow today as Rangers fans tore down a statue of Steven Gerrard outside the club’s Ibrox stadium. Supporters are incensed by the Liverpudlian’s decision to join Aston Villa as Head Coach.

“Ungrateful,” Gerrard told Soccer on Sunday. “This huge majority of Rangers fans are giving the small minority of decent, law-abiding Rangers fans a bad name. It’s not for me to tell Nicola Sturgeon how to run her country, but hang a few of these so-called supporters and their mates will think twice about pulling down statues.”

“It’s unfair,” said the 41 year-old. “Because of an obscure 300 year-old Scottish law, I now have to drive up to Ibrox and remove my own statute. What the fuck am I going to do with a 60 foot concrete me? If I stick it outside Villa Park, you lot in the press will call me arrogant.”

“Probably I’ll just dump it on Gary Neville’s doorstep and do a runner,” he added.